Overfishing is depleting oceans across the globe, with 90 percent of the world’s fisheries fully exploited or facing collapse, according to the United Nations Food and Agriculture Organization. From Russian king crab fishermen in the west Bering Sea to Mexican ships that poach red snapper off the coast of Florida, unsustainable fishing practices threaten the well-being of millions of people in the developing world who depend on the sea for income and food, experts say.

But China, with its enormous population, growing wealth to buy seafood and the world’s largest fleet of deep-sea fishing vessels, is having an outsize impact on the globe’s oceans.

Having depleted the seas close to home, Chinese fishermen are sailing farther to exploit the waters of other countries, their journeys often subsidized by a government more concerned with domestic unemployment and food security than the health of the world’s oceans and the countries that depend on them.

Increasingly, China’s growing armada of distant-water fishing vessels is heading to the waters of West Africa, drawn by corruption and weak enforcement by local governments. West Africa, experts say, now provides the vast majority of the fish caught by China’s distant-water fleet. And by some estimates, as many as two-thirds of those boats engage in fishing that contravenes international or national laws.

China’s distant-water fishing fleet has grown to nearly 2,600 vessels (the United States has fewer than one-tenth as many), with 400 boats coming into service between 2014 and 2016 alone. Most of the Chinese ships are so large that they scoop up as many fish in one week as Senegalese boats catch in a year, costing West African economies $2 billion a year, according to a new study published by the journal Frontiers in Marine Science.

When it comes to global fishing operations, China is the indisputable king of the sea. It is the world’s biggest seafood exporter, and its population accounts for more than a third of all fish consumption worldwide, a figure growing by 6 percent a year.

For Beijing, the nation’s fleet of fishing vessels has helped assert its territorial ambitions in the South China Sea. In Hainan Province, the government encourages boat owners to fish in and around the Spratlys, the archipelago claimed by the Philippines, and the Paracel Islands, which Vietnam considers its own.

“Young boys spend their lives preparing to become fishermen,” said Eddie Agamos Brock, who runs Tao, an ecotourism initiative. “Now they have no way to make a living from the sea.”

“We always thought that sea life was boundless,” he said while patrolling the coastline. Now, he added, “we are facing a catastrophe.”

Mr. Sall became a local hero after he single-handedly detained the captains of two Chinese boats that were fishing illegally. These days, residents curse him under their breath because he has expanded his campaign against overfishing to include Senegalese boats that flout fishing rules designed to help stocks rebound.

“I understand why they hate me,” he said. “They are just trying to survive from day to day.”

Still, most of his ire is directed at the capacious foreign-owned trawlers. These days, more than 100 large boats work Senegalese waters, a mix of European, Asian and locally flagged vessels, according to government figures. That number doesn’t include boats that fly Senegalese flags but are owned by Chinese companies.

Also uncounted are the ships that fish illegally, often at night or on the fringes of Senegal’s 200-mile-wide exclusive economic zone — well out of reach of the country’s small navy.

Dyhia Belhabib, a fisheries expert trying to quantify illegal fishing along the African coast, said Chinese boats were among the worst offenders; in West Africa, they report just 8 percent of their catch, compared with 29 percent for European-flagged vessels, she said.

According to her estimates, Chinese boats steal 40,000 tons of fish a year from Senegalese waters, an amount worth roughly $28 million.

Her figures do not include boats engaged in illegal fishing that were never caught — nearly two-thirds of all Chinese vessels, she said. “When darkness falls, the dynamics of illegal fishing change dramatically and it becomes a free-for-all.”

The problem is magnified across West Africa. Some countries, like Guinea-Bissau and Sierra Leone, have just a handful of boats to police their national waters.Photo 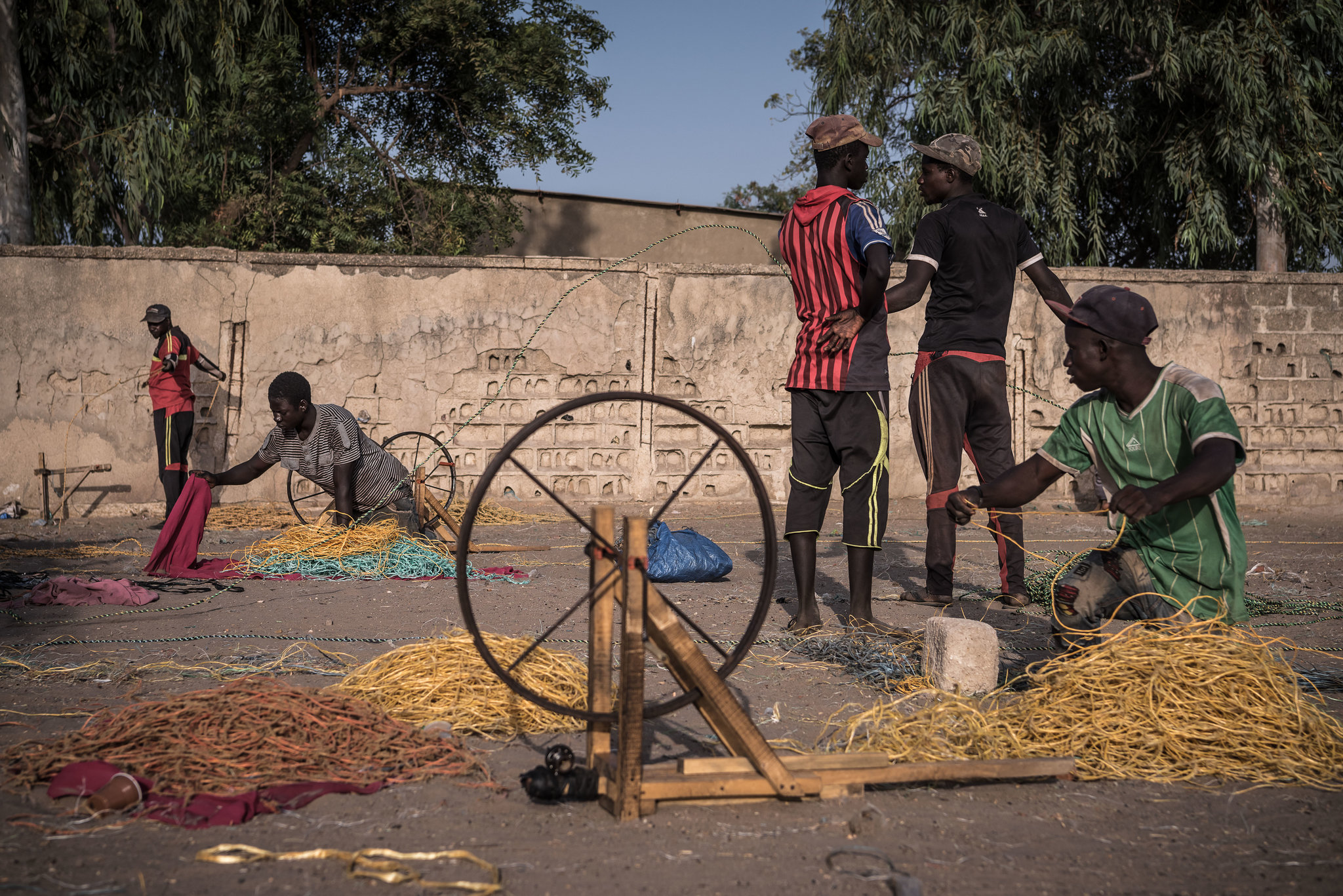 “People come to me and ask, ‘If China doesn’t fish, where would Americans get their fish to eat?’” he said.

In Senegal, recent legislation has drastically increased fines for illegal fishing to $1 million, and officials pointed to the two impounded foreign-owned boats in Dakar, the nation’s capital, as proof that their efforts are bearing fruit.

Glancing out at the sea, Capt. Mamadou Ndiaye described the challenges he faces as the director of enforcement for Senegal’s Ministry of Fisheries and Maritime Economy. Many scofflaws, he noted, fish on the edge of Senegal’s territorial waters and can easily escape when threatened.

His agency cannot afford speedboats or satellite imagery; it could also use a functioning airplane. “Still, we have more than many other countries, and we have to help them, too,” he said.

Most of the small pelagic fish that swim in Senegalese waters — and make up 85 percent of the nation’s protein consumption — migrate in enormous schools between Morocco and Sierra Leone. Along the way, they are scooped up by hundreds of industrial trawlers, at least half of them Chinese-owned, experts say.

In 2012, Senegal stopped granting licenses to foreign trawlers for these small fish, but neighboring countries have refused to follow suit. Mauritania, where most of the fleet is Chinese-Mauritanian joint ventures, is home to 20 fishmeal factories that grind sea life into exported animal feed, with another 20 planned, according to Greenpeace.

Protecting the seas sometimes means saying no to China, whose largess is funding infrastructure across Africa.

“It’s hard to say no to China when they are building your roads,” said Dr. Samba, the former head of Senegal’s oceanic research institute.

Then there is the lack of transparency that keeps national fishing agreements with China secret.

“There is corruption in opacity,” said Rashid Sumaila, director of the Fisheries Economics Research Unit at the University of British Columbia Fisheries Center. “Sometimes the Chinese pay bribes to get access and that money doesn’t trickle down, so the population is hit by a double whammy.”

Beijing has become sensitive to accusations that its huge fishing fleet is helping push fish stocks to the brink of collapse.

The government says it is aggressively reducing fuel subsidies — by 2019 they will have been cut by 60 percent, according to a fishery official — and pending legislation would require all distant-water vessels manufactured in China to register with the government, enabling better monitoring.

“The era of fishing any way you want, wherever you want, has passed,” Liu Xinzhong, deputy general director of the Bureau of Fisheries in Beijing, said. “We now need to fish by the rules.”

But criticism of China’s fishing practices, he added, is sometimes exaggerated, arguing that Chinese vessels traveling to Africa were simply responding to the demand for seafood from developed countries, which have been reducing their own fleets.

“They leave us with nothing, and we are powerless to stop them,” Ms. Mbaye said. “Now we are forced to catch juvenile fish, which is like going into a house and killing all the children. If you do that, the family will eventually disappear.”

Here in Joal, the dwindling catches have prompted the closing of three of the town’s ice factories, with the fourth barely holding on. On the town’s main quay, where women wade into the surf to meet arriving pirogues, the competition for fish has become intense.

“We used to have big grouper and tuna, but now we are fighting over a few sardinella,” said one buyer, Sénte Camara, 68. On a good day, she makes $20; on a bad day, she loses money. “The future is dark,” she said.

To catch anything, fishermen have to venture out farther, putting their lives at risk if an engine stalls or a late summer storm barrels through. Sometimes the danger is a super trawler whose wake can easily swamp a pirogue.

At Joal’s vast outdoor smoking center, the lack of fish was apparent in the empty racks normally stacked with yellow-tailed sardinella and millet stalks smoldering below.

Daba Mbaye, 49, one of the few people working, said the smokers could no longer compete with the fishmeal factories.